All patients have post-surgical bleeding in the early hours after heart surgery. Some patients, depending on the extent of the surgery, comorbidities, or the use of preoperative anti-platelet drugs like Plavix , bleed more extensively than others. Studies have shown that the volume and rate of postoperative bleeding is strongly correlated with negative outcomes.(1, 2)

Most of the time, the duration of bleeding is related to how long it takes for a patient’s coagulation system to kick back in after surgery. The nature of open-heart surgery requires that patients be anti-coagulated, cooled, and have their blood run through a heart-lung bypass machine. Combined, all of these impact the ability to form clot in the early hours after heart surgery. 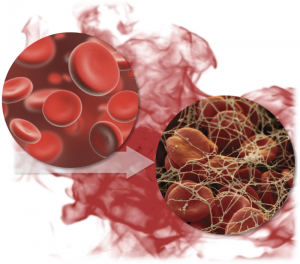 After surgery, patients will continue to bleed inside the chest because of the trauma caused by the surgery. The blood is evacuated from the chest using chest tubes while coagulation is restored and bleeding subsides. During this period, the postoperative care team works diligently to correct the coagulation defect. Sometimes this is as easy as rewarming the patient, and other times medications are required to correct electrolyte and acidosis issues. In some instances, deficient coagulation factors and blood products like platelets are given.

As coagulation is restored, the shed blood in the post surgical spaces undergoes a phase change from liquid to solid. This occurs over a time course that can be rapid (less than an hour), or slow (multiple hours). During this phase change, the platelets start to become sticky again, fibrin strands are formed, and together they form the basis of clot. This is good when this occurs at the site of oozing post surgical spaces, as it stops the bleeding. But when this happens in the chest tube, evacuation can be compromised when there is still post-surgical blood to be evacuated. Compounding the issue is that artificial materials like chest tubes are very potent pro-coagulant triggers, which is why chest tube clogging is so common.

Critically, blood evacuation has to be maintained during this phase change to prevent Retained Blood Complex (RBC). When evacuation is impaired acutely, this can lead to cardiac and respiratory compromise.  Sub-acutely, retained clot can drive the process that leads to effusions around the heart and lungs. Both can impact recovery and potentially lead to readmissions. Thus, many heart surgery programs are adding PleuraFlow ACT to their ICU protocols to maintain evacuation capacity in this early postoperative period during the phase change from liquid to solid as the coagulation system is restored.